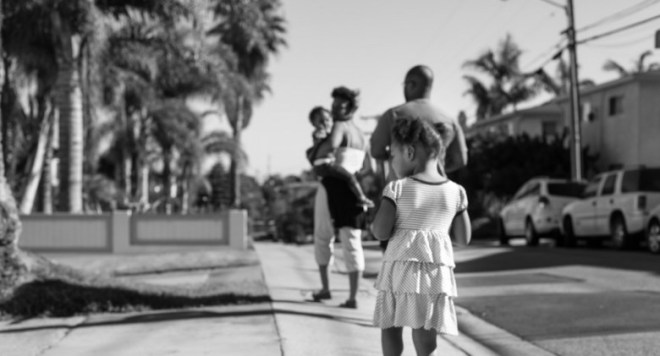 Early in my marriage I would pick fights. I didn’t think I was starting arguments purposely but the questions I posed to Ro were so loaded that any answer he gave would send me into a tailspin…

“Honey, what kind of parent do you want to be?”

Now that doesn’t seem too bad of a question, but it was… I probably asked him around 11:00pm after a 12 round Money Mayweather fight to put our insomniac 1 year old to bed; we were both in need of rest.

It was bad because I was pregnant, breastfeeding and perpetually exhausted from taking care of a young baby… emotional hardly describes the state I was in.

It was bad because my partner was new to being a husband and father. He was still letting go of the selfish habits that were completely acceptable for a bachelor.

But what made the question the absolute WORST, was  I wanted him to ease all of my insecurities and fears about our marriage in ONE conversation.

The answer I was looking for was something like this:

” Baby, I want to be the most involved and active father! I’m going to spend quality time with them everyday, read to them, take them on Daddy-dates. I know sometimes I make mistakes, I’m sorry for that! Please give me a little time, but I promise you I’m going to be the best dad ever.”

The answer I actually received was:

So then I would ask leading questions and try to pull the answer I desired out of my husband. He would play along for a couple minutes but quickly realize he was fighting a losing battle, so he would quit. His answers would get shorter and shorter, I would get more and more angry.

Soon that question would transform into an accusatory statement..

” YOU DON’T KNOW WHAT KIND OF FATHER YOU WANT TO BE, YOU DON’T WANT TO BE BETTER FOR ME OR YOUR KIDS”

I would often cry myself to sleep after these “discussions”.

Maybe he’ll NEVER change a diaper without me asking.

Maybe he’ll NEVER have date night with my daughter,

Maybe he’ll NEVER plan quality time to just sit and play with her so I can have a break.

So I picked fights looking for security…

My fear that my marriage would fail, was causing me to pick fights, which could have caused my marriage to fail.

“Fear has torment, But perfect LOVE cast out fear”

I let fear torment myself and my marriage. However with help I realized my husband’s LOVE for me was real. Every now and again I might slip up and ask one of my innocent questions, but now no matter what the answer I CHOOSE to believe that I am loved, and whatever my little issue is, it will work itself out in time.

5 thoughts on “Picking Your Battles: How I did it all wrong”